A Dash of Hope with Dinner

Mixing random ingredients from the cupboard was a favorite activity for my son Matt at age six. He’d whip up concoctions of sugar, spices, and liquids and stick them in the oven, eagerly awaiting the outcome of his experiment. As a very efficient and tidy mom swooping in to clean up, I missed the exploration and joy Matt found in the kitchen. And in turn, an opportunity for deeper connection to my son.

My driving motivation in those days was the appearance of success and achievement – somehow if we all sat down to an evening meal of my own making, I was the mom and wife I was supposed to be. There was no room for creativity or enjoyment with my children in the process of cooking because that would be less efficient and certainly messier!  And if the outcome was less than delicious, I hadn’t achieved my goal. Reflecting now, I see that my fear of failure – of appearing weak or incapable as a homemaker – robbed me of hope in an outcome so much greater than a prompt dinner time or a tidy kitchen.

As a college student in New York City, Matt rediscovered creativity in the kitchen, and when he came home, I discovered his delight in preparing delicious vegetarian meals for our family. He especially liked when I served as his sous chef, chopping onions and vegetables for his creations. Working in the kitchen with few words, I relished the companionship of my son and delighted in my role as helper. No longer was my need for success controlling the dinner hour – it didn’t matter how long dinner prep lasted, how disastrous the kitchen appeared, or how the meal reflected on me.

The kitchen became a classroom for lessons from Matt – not only in a new way of cooking, but a new way of surrendering my strong instinct to efficiently manage the result. I realized how limiting the measurable outcomes of my success had been. Responding to God’s invitation, I relinquished control of outward appearances and embraced a transcendent story of hope in a much more meaningful and messy pursuit.  With renewed imagination, I entered into the hope of a much bigger story – a story which embraced the creative gifts of my son, invited both of us into new relationship, and graced us with a beautiful, delicious, and nourishing meal at the end. 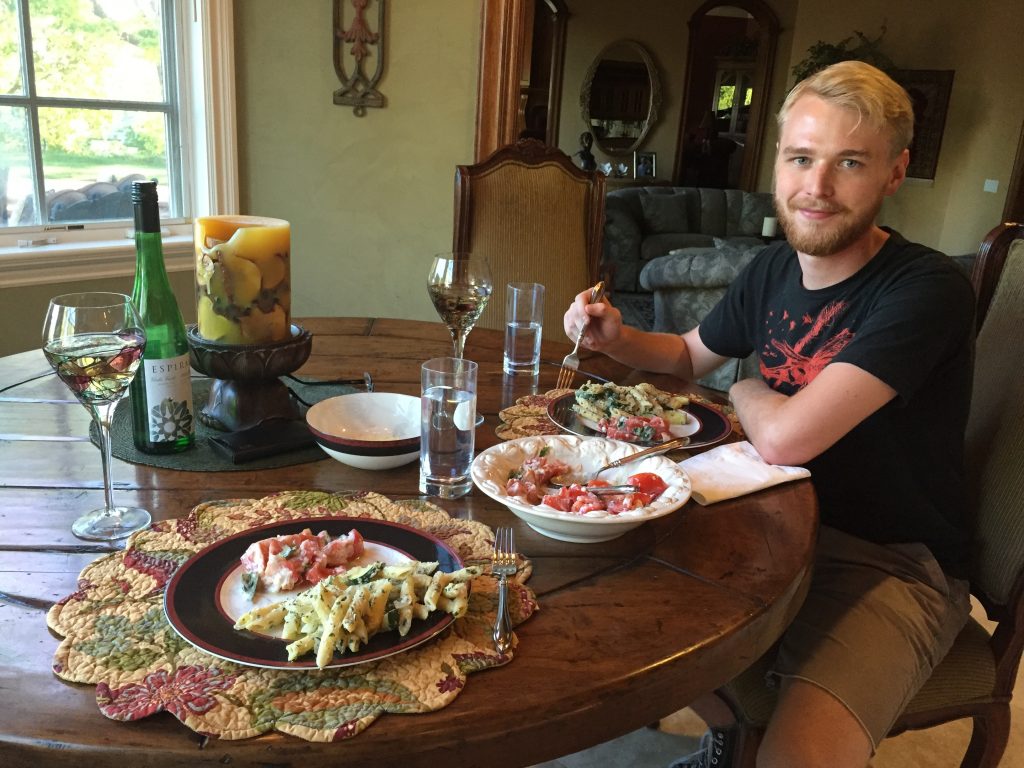 Our heavenly Father invites all of us into His story of hope that frees us from our fear of loss and failure. His upside down narrative ushers us into a kingdom where the first shall be last, winning comes through losing, and death ushers in life. There’s no better recipe for bringing hope into every corner of life, even your dinner menu.

How is God inviting you to surrender your need for achievement and success to embrace hope in His bigger story for your life?

Shauna Schneider
Shauna Schneider is a surrendered follower of Jesus with an enthusiastic and encouraging nature who yearns to learn and demonstrates wisdom in discernment of Gospel truth. Always aware of the Lord’s leading and the many ways we can hear God’s voice, Shauna’s enthusiasm for her faith and gift for hospitality spill over into a wide network of friends and community connections she loves to serve. Wife to Phil, mother of three adult children, and retired physician, Shauna is cofounder, board member, and ministry director for Flourish San Diego.